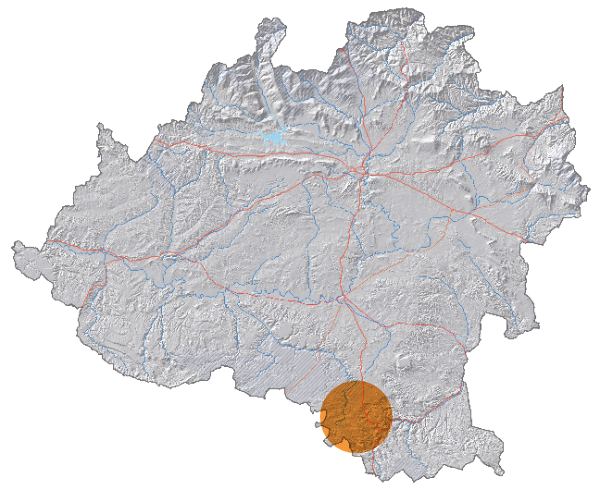 Location and access: A 65 Km. in the south of Soria, it accessed from Soria capital Madrid highway A-11 to exit 65 Yelo-Miño de Medinaceli. From Madrid on the same highway exit it would be taken towards Medinaceli-Fuencaliente, and through Ambrona we arrive Miño de Mdinaceli.

Status: The area has no protection figure except the laguna de la Sima, included within the Regional list of wetlands of Castilla y León number SO-19.

Terrain: Heterogeneous habitat composed of a large central plain where there was a large-a lagoon of the largest Soria-to mid-twentieth century the, laguna de Conquezuela, now turned into fields, but still waterlogged in very rainy periods. This trough is closed by the chalky hills south for several retaining own habitats for steppe birds, although it transformed in part by unfortunate reforestations and a windfarm. In northern sandstone crags they appear retaining copses of oak.

Visit duration: Variable. In 2-3 hours can be seen as principal of this area, but it recommended a tour through the valley of the river Bordecorex further lengthen the duration of the visit.

Time of visit: Winter is very cold here being an area between 1100 and 1200 meters. However, the visit can be very interesting in December and / or January if the former grounds of the lagoon are waterlogged Conquezuela, elongating the period until late April and early May. As in almost all the tours we propose, late spring is the best time to visit this space. 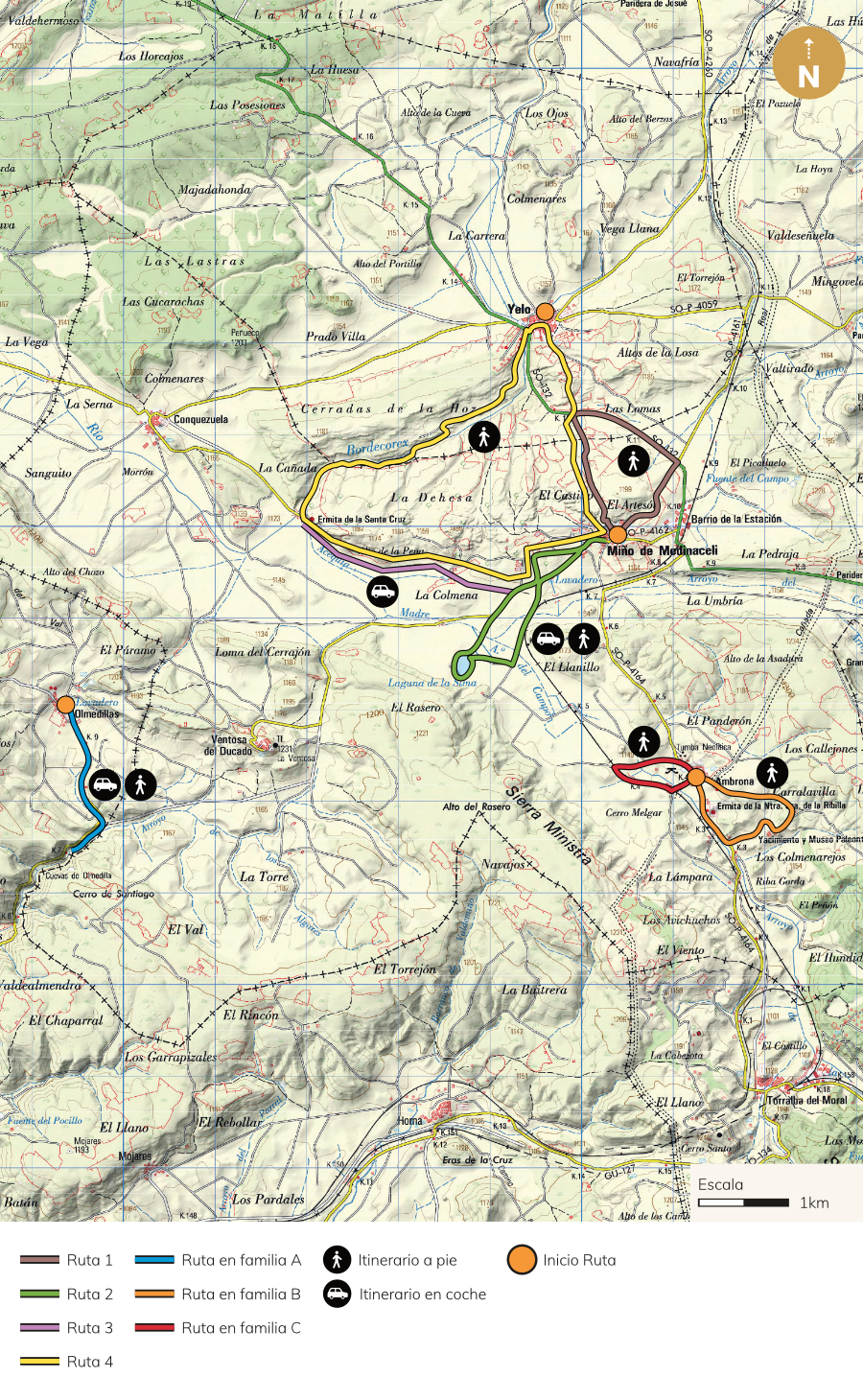 The nearby valley of Ambrona and this valley where the river appears Bordecorex has been formed in recent years as a prehistoric cultural space research given the multiple and various archaeological sites have been found-and excavated in some case-. Neolithic appears the best time characterized and, most suggestive, it is that some of the villages established here could live in stilt given the extent, depth and duration of the large sheet of water bucket fill this endorheic.

The laguna de Conquezuela, like many other wetlands in the province, It was drained in the years of developmentalism of the twentieth century, building a large canal that drains water into the river Bordecorex.

During periods of heavy rain that occur every so often, that channel can not drain fast enough with water and flooded the grounds of what was the former lagoon, at the foot of the hermitage of Santa Cruz.

Another gap that is located permanently is the laguna de la Sima, although its endorheic character causes remain dry much of the year. This gap is not signposted so we must be vigilant to maps and directions.

A tour with several stops that allowed us to see the birds in the area include:

1 A first stop in Miño de Medinaceli, walking the glens are to the north of the village.

3 Another third stop in the vicinity of the hermitage of Santa Cruz. If the pond water Conquezuela would have as an intermediate stop along the road Miño to Conquezuela can make timely sightings.

4 For wanderers birders recommend a circular tour between Miño, the hermitage of Santa Cruz -for road- and then down the right bank of the river Bordecorex to find the path GR 86 to which we incorporate to head back to Miño de Medinaceli.

A Cueva de las Olmedillas. We partially move into the province of Guadalajara to observe these curious limestone formations with traces of prehistoric human occupation. The right bank is in the province of Guadalajara, but the left bank is Soria, in the term of Ventosa del Ducado. Rupicolous birds are the characteristics of these spaces with good sides of Western jackdaw, Red-billed chough, Ravens, Griffon vulture and Golden Eagle, that they will be all year. Crag martins, Rufous-tailed rock thrush and Blue rock thrush they will be in spring. Conquezuela as both could be here Eurasian eagle owl.

B Ambrona. The visit to the surroundings of the town of Ambrona has a couple of points of interest. The first is around the paleontological site. After seeing the site, following the path that goes right there and goes into the wilderness, we could hear the least Dupont's lark and view other species of these environments steppe.

C On the other hand, and radically different, the picnic installed on the poplar forest to the side of the people. Apart from the recreational area itself, the existing source with the grove allows easy observation, of many common species like Golden orioles, Blackcaps, Robins, Collared dove, etc.

Winter. Although we have said it is a cold zone is no less true that there are many anticyclonic days, splendid sun after morning frost, where there are species of interest that can make pretty interesting visit. Here are not as rare species Brambling, the Yellow hammer, the Hawfinch, Eurasian siskin, thrushs... that combine heterogeneous environment. In recent years they have also shown up here Spanish sparrow. In winter they make erratic movements and can be found roosting around Laguna de la Sima, with over one hundred copies.

If the winter was rainy, the existence of the wetland in Conquezuela is a guarantee for the presence of anatidae, especially Common teal, Northern pintail and Mallards which can be seen from the first row time, as the weeks go on January and February, from Grey heron, storks, some waders first step as Green sandpiper and sides of Northern lapwing. Common crane and Greylag goose also they cited here, although to a lesser extent than in other county wetlands Barahona.

March April. Waterfowl are still the protagonists. Shorebirds are the most abundant as add plovers, redshanks, sandpiper and follow the Northern lapwing until the wetland is emptied of the whole, at the beginning of the month May. Attention is then focused on the breakwater birds in small cut sandstone near: Egyptian vulture, Common kestrel, Crag martin, Rock sparrow, Black redstart, Common raven, Red-billed chough, and the Rufous-tailed rock thrush and Blue rock thrush.

Laguna de la Sima is not yet dry in this period and host a small population of Mallards, Little grebe, Eurasian coot, Water rail, Common moorthen and Great reed warbler.

May June. Oak forest nearby are slow to take leaf. Sometimes it is not until late May when this event occurs. Forests are regenerating, not many mature specimens, but they harbor a species interesting with certain dyes "northerners". In recent years can be seen here species like Tree pipit, the Song thrush, the Eurasian nuthatch and the Red-backed shrike.

It is very curious that, next to this northern expansion, There are some species that arrive from the south as the Sardinian warbler and the Spanish sparrow. If we extend the visit any of the nearby moorland areas, with Thekla lark, Greater short-toed lark, Tawny pipit, Spectacled warbler and Black-eared wheatear, the list of species present is more than considerable. 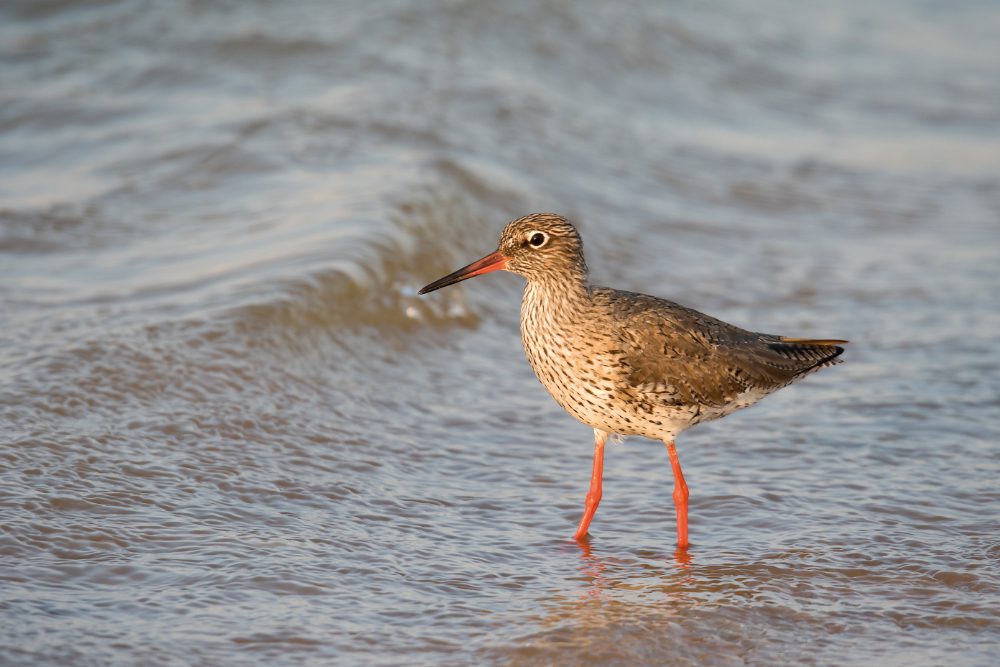