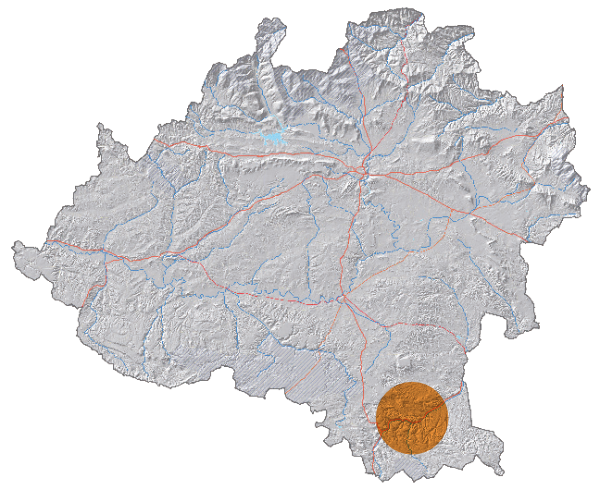 Location and access: Southern province. Soria from the A-15 will be taken to Medinaceli, taking the old national II here, Zaragoza direction and leaving at the exit 154 Lodares direction and Jubera. Following the old national II, we reach the village of Somaén starting point of this route, but also we could start it from Velilla de Medinaceli whose access will have left a few kilometers before, on the right.

Status: No form of protection.

Terrain: Small limestone canyon carved by the stream of the Salobral de Avenales, between the abandoned village of the same name and the river Jalón, in Somaén.

Means of access: The only way to approach these two peoples is by our own means, since there is no public transport.

Difficulty: Limited. There is a road that turns into trail, signposted GR86 we can make the journey without difficulty.

Visit duration: Variable, depending on our interest, although the proposed itinerary, round-trip journey can take us 5 to 6 hours.

Timing: Spring and autumn are the ideal times to observe the most typical birds, but also the winter might hold interesting observations.

Comments: None of particular interest. 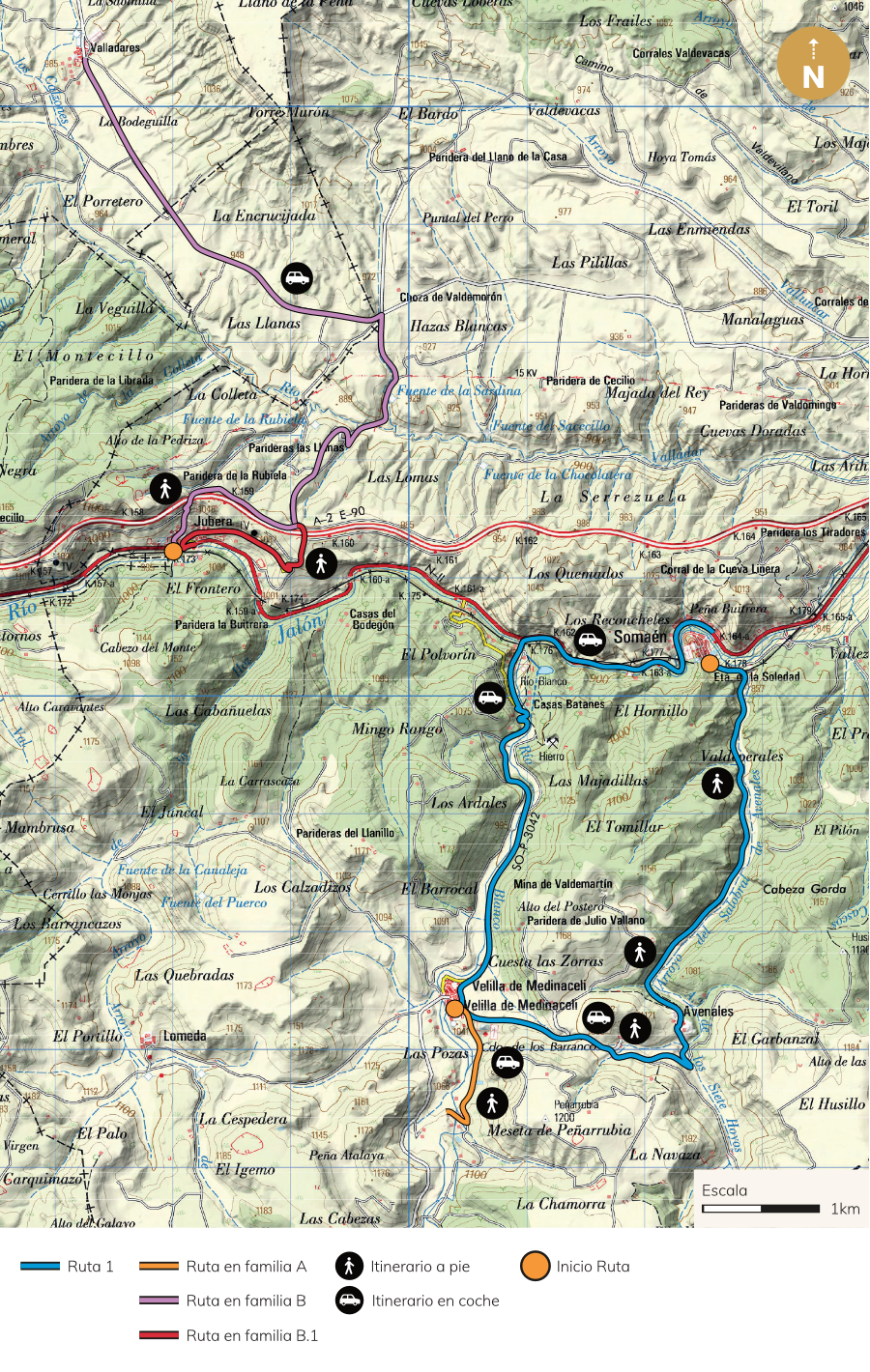 Jalon Valley throughout this sector of the province of Soria is a succession of small valleys and canyons registered in limestone crags of this sector of the Iberian. Especially significant are the rivers and streams of the entire right bank of the Jalón, greater or lesser extent, all descend on a clear north-south from the foothills of the Sierra de Solorio, between 1270 and 1350 meters.

In this sector the río Blanco appears, most important and constant river in its flow, since it feeds the springs that drain much of the Páramo de Layna, of the small stream of the Salobral de Avenales and the river Jalón, it is shown as a mountain river whitewater and fast on this stretch.

All these rivers have formed gorges and canyons of varying size. Precisely the end of the ravine Avenales and environment of the people of Somaén, show the largest and most attractive walls. Itself, the people of Somaén, worth a visit as available, construction and urbanism. Rivers hardly have highlighted timberline. Not the case with slopes, throughout the sector covered by lush oak.

1 The main route runs through the ravine Avenales, between this village and Somaén. This tour can be round, because they are just 3,5 and a half. Anyway, for those who like to walk them it is highly recommended to make a circular tour. Leaving Somaén, reach Avenales. There is a path to the west than two kilometers we will reach Velilla de Medinaceli.

From here we have to go on the local road that goes down to the old national in Jalón, can see a fantastic stretch of oak wood, and the crag of the valley from higher altitudes. Before arriving there we can get a bit to the old water plant Velilla, a small hanging in the valley dam that feeds the hydroelectric plant of the río Blanco.

Once we reach the old road, we continue along here until Somaén, half a kilometer before stopping at the mill, and getting closer to the big cave, equipped with multiple elements climbing, you can bring interesting observations as Wallcreeper that can stop in the autumn-winter.

A La Chorronera. The río Blanco is a small wonder. Among tuff rocks, the river plunges forming a small waterfall called "La Chorronera", to which it is accessed by a signposted path from Velilla, where we would forego the car.

B Jubera. Nestled between the rocky walls forming the Jalón river passing it is also a good spot for bird watching. From the village comes a paved road that goes going up the slope and crosses under the motorway towards the abandoned village of Valladares.

One option is to get there and see a Mediterranean landscape of crop rotation, bushes and small clumps but not, simply take a walk along the paved stretch used to see many of the birds most typical scrub here with special preference for Dartford warblers and Sardinian warbler, Blue rock thrush, Northern wheatear and Black-eared wheatear... If we move down a path (B.1) to the ruins of an ancient castle, we can have splendid views across the valley: Griffon vulture and Golden Eagle, They are almost assured at all times.

The upper course of the river Jalón we can bring the observation of the White-throated dipper. Since January we could hear singing males as demarcating their territory against other congeners. They breed very soon, because in March may have nests. Also in January-February they begin to sing Eagle owls. This whole region is rich in Eurasian eagle owl, albeit sometimes very discreet. Next to Griffon vulture, any Red-billed chough and other small forest birds encourage us in the winter months inside, usually, one poor representation in number of species.

In March have reached the Crag martins. In areas closer they are all year, but here, still going. The same is true of the Blue rock thrush, for a copy, and not always, He can stay all winter. Typically, almost the entire population leave the crags the first days of November again during February-March. At that time we can see the jealousy of two of the most spectacular birds of prey of the cut: the Golden Eagle and the Peregrine falcon. The latter appear in the Jalon cut and the eagle in the valley of Avenales.

We remember again how important it is not to disturb the birds in their nesting areas near. They are very delicate times when discomfort when they start breeding can lead to the abandonment of the oviposit.

When hawks and eagles they will begin to raise the time arrive Egyptian vulture. A couple also appears in the environment Somaén. in the same rock wall, with vultures, appears another of the most characteristic species of this canyon: the Alpine swift. Rufous-tailed rock thrush, Red-rumped swallow and House martin complete the list of rock birds. But also in May and June they have come many other summer species. With existing forests and hillsides, the warblers they are the queens of these areas. And here we have almost all species, except Common whitethroat, only it occurs in migration. The Sardinian warbler, which is quite unusual in Soria, it appears with good densities here. Subalpine warbler and Western orphean warbler the oaks; Dartford warbler and Spectacled warbler on the slopes of Avenales to Velilla Blackcap and , scarcer, Garden warbler, on the pole and on the last leg of riparian forest in the stream of the Salobral. Density Bonelli´s warbler, Melodious Warblers and other birds of these environments is very prominent. 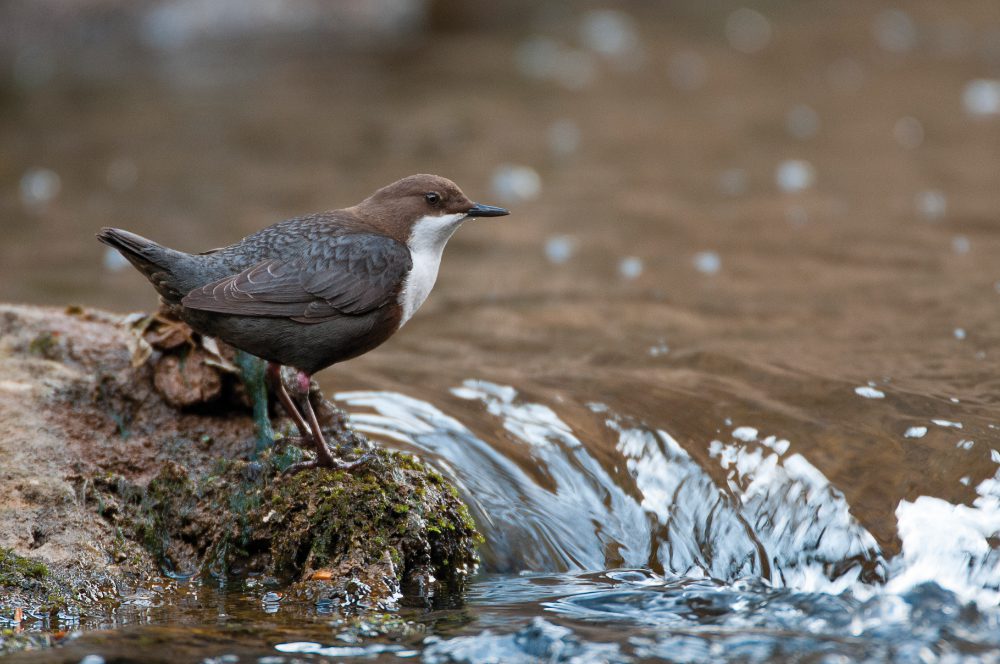