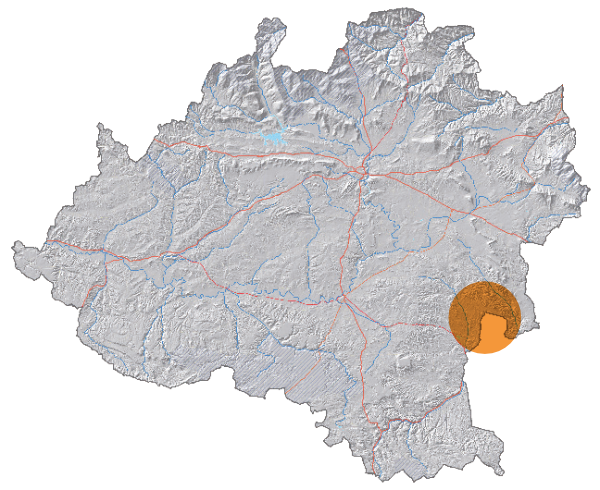 Location and access: A 70 Km. in the SE of Soria, in the corner of the Vicarias. It accessed from Soria by road from Madrid A-11 to Almazán, where the C-116 is taken to Morón de Almazán and Monteagudo. In this town, the provincial highway is taken from Serón de Nágima and Gómara, watching 2 Km., on the left, the signpost of the reservoir. Access from Madrid or Zaragoza is also very simple, as it should be addressed by the N-II to the signposted turnoff indicating Soria and Almazán, being just Monteagudo 8 kilometers.

Status: It is included in the Catalog of Humid Areas of Special Interest of Castilla y León. The reservoir and a wide area around it, is SPA (15,541 hectares). Hunting is prohibited, not fishing, authorized since 2005.

Visit duration: From 2 to 3 hours to see it completely, but you can invest the time it want it is very accessible.

Time of visit: Except midwinter months (December-January) the rest of the year is good to approach. The best times would be the migratory: April-May and August-September. Since the massive introduction of carp and other species of exotic fish ornithological importance of the reservoir it has fallen a lot and, for example, in winter, hardly interesting observations occur.

Comments: It is recommended not to approach the shore. If the reservoir water level is high the use of telescope it would be highly recommended. It has also enabled a bird observatory at the western end of the reservoir, which it is in poor condition.

Monteagudo is a place of continental climate. Most of the time we can expect cold weather and very unpleasant, especially by the presence of wind that often blows frequently. In summer, conversely, only at the observatory could take refuge from the relentless sun, so the approach to early morning is recommended. 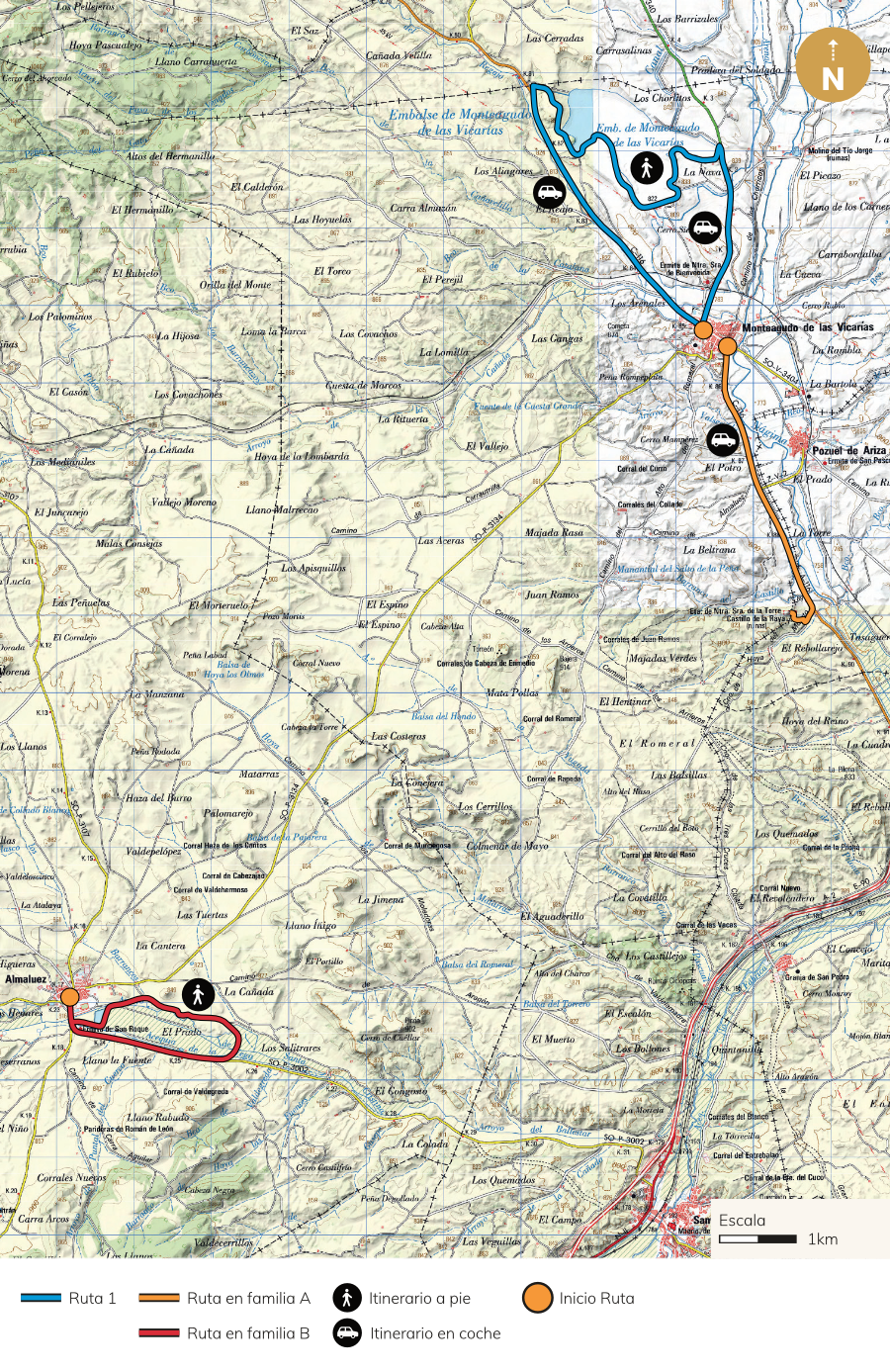 In the middle region of the Vicarias, the driest area with just Soria 300 mm. annual rainfall, it is what is undoubtedly the most important wetland in the province, a reservoir with a long career as the first works of what was a small wetland were conducted in 1883. That first reservoir was extended in 1982, we are as we can see today, occupying an area of 123 has. and a capacity of two cubic hectometres. The supply of water to the reservoir will arrive in two ways: the stream of the Regajo coming from Valtueña and the river Nágima, sensing the water in the term of Fuentelmonge. Only the latter carries water regularly.

The image of the reservoir in recent years is far much of it had during the entire decade of the 80 And till 1995. Today, the reservoir appears with an important level of water, and completely devoid of lush vegetation, contrary to the situation presented years ago when the reservoir had very little water, but instead he had a rich lush vegetation belt composed mainly of reeds and serving for the settlement of species such as warblers, moorhen, the Water rail or the Marsh harrier, birds have stopped reproducing in the reservoir.

There is no set route. There is a paved road that encircles a portion of the perimeter of the reservoir and can go, almost, to the parking. From here the road continues, reaching the bird observatory and ends on the road from Morón to Monteagudo. If there have been heavy rains the possibility of getting stuck with the car is very large.

On the other bank of the reservoir there is also a road leading to a viewpoint from which can be seen throughout the reservoir. The same as indicated on their status in the rainy season on the road above applies to this. It is recommended not access the shore of the reservoir, especially in breeding season.

A Castle Raya. Four kilometers from Monteagudo, following the road to Monreal de Ariza, we see figure Castle of La Raya, so named because it is located on the border of the provinces of Soria and Zaragoza, the hermitage of Nuestra Señora de la Torre at his feet. Leave the car on the way there to access the chapel because it is in very poor condition neither much site-.

It is the typical habitat Dartford warbler -This whole year- and Spectacled warbler, with Crested lark, Thekla lark and Rock bunting. As important fact should be noted that the ruins of the castle house a couple Black wheatear, very scarce in the province of Soria.

B Almaluez gap. If you have traveled the road from Monteagudo to Almaluez looking for steppe birds can make a stop in this village because, to the side of the swimming pool is a raft of irrigation, which it is fenced and always has birds in it throughout the year: Mallards, grebes, Eurasian coot and moorhens they are very easy to observe.

In winter there are some Great cormorant anatidae and passing some more like Common pochard , Garganey. In the existing reed, both the raft and nearby streams shall see and hear in spring European reed warblers and Great reed warbler, Zitting cisticola and Common stonechat and Whinchat. In September it is advisable to walk the path down parallel to the drain of the valley because we can also see flocks of Spanish sparrow the look Bluethroat and Grasshop per warbler in step.

Despite being a privileged space for bird watching, Monteagudo reservoir has seen better days. Two of the main species of the reservoir, They are now almost testimonial. In the summer months it was established here the best colony of Black-necked grebe (57 nests 2002) and concentration over 1000 individuals Red-crested pochard, from other places to make your moult.

Also in winter a number of wintering birds were concentrated: 1.000 birds on average in the years 80,700 in the 90s-early XXI century, but just 100 nowadays. All these changes, negative, in the population of these water birds that depend on the underwater flora should, as we have indicated, the presence of carp and other fish that have altered to make it disappear, the vegetation and, thus, the ability of these birds to find food.

But this is no obstacle that we can not continue to enjoy many species of birds such as:

Cranes (Mid February / March and late October / first half of November). Surely it is the greatest show with which you can enjoy today in the reservoir. Monteagudo situation on the migratory route of this and many other birds, makes the presence of cranes use the reservoir as a rest and relaxation on their trips is a constant. If we're lucky we can come up with figures of several thousand cranes make a stop here. If you have slept, they will use the most northwestern shore, precisely the only bank in which there is no way around.

A close walk there only going to get us to raise and disturb all, so that it is more than inadvisable. The best place to see them is from the viewpoint. from here we can witness, if we are one day early in the morning, how they are slowly stretching cranes and depart, or to continue their migratory route or to eat something on cereal farms nearby, especially in the plain that leads to Fuentelmonge.

Lesser kestrel (mid July-late August). This is a species that does not play, neither here nor anywhere else in the province of Soria. Nevertheless, on the dates indicated, about 50 Kestrels use power lines near the entrance to the reservoir as an innkeeper.

Such concentrations occur in other areas of the province and correspond to the summer movements of this species leaving their breeding grounds in the southern plateau and the valley of the Ebro because the heat has killed its prey and moves to other areas of the cooler north.

Osprey versus Black stork (March-May, mid August-early October). Both species have increased, fortunately, their populations in Europe and its observation in the waters of the interior is not as rare as today as it could be done 25-30 years. A sample of, as we have indicated in the case of cranes, the strategic location of the reservoir for many migratory birds.

With a little luck in the case of the osprey we can see some fishing haul. If successful you will go with the fish fish to a nearby electric pole where he will give a good account of it. The review of all support poles and power lines surrounding the reservoir has to be something you do because there could always see especially raptors, especially in spring-summer Black kites, Short-toed eagle, Common buzzard, Booted eagle, Eurasian hobby and Golden eagles as tenants thereof. We can also observe the Carrion crows, present throughout the year in the reservoir and surrounding.

Somormujo lavanco. (From mid-February to November). the rarefied Eurasian coot to near disappearance Great crested grebe is, with him Mallard, the most representative aquatic bird reservoir. In late summer the Great cormorant population is approaching 50 specimen and it is a sight to see these birds in mating season. In winter you can get a copy, but usually disappears entire population.

Garganey (March to mid-April). Mallards can be seen all year round and, in steps, can be seen in low numbers all anatidae surface of the country. These include the garganey it is still observed in good numbers in the prenuptial migration. To highlight the 205 specimen seen the 12 March 2009.

Passerine species. Even though sometimes visited a wetland thinking only passerine species not own no less true of these spaces is that it would be foolish to long for the many more species of passerines we can see over here. Still in winter, this is evident with large flocks of linnets and Rock sparrow. There's also Crested lark, Thekla lark, difficult to distinguish because here sometimes appear in the same places. White wagtails, Meadow pipit and Water pipit they move on the banks.

As spring progresses, for March, They begin to appear the first swallows and martins. In April we may be witnessing the passing of many of these birds, although you can not compare in this regard a few days of September, with thousands of House martin, Sand martin and Barn swallow. Along the April they are coming Greater short-toed lark, Tawny pipit and Spectacled warbler, three species of steppe habitats frequently here. And tied to the water Yellow wagtail. Hopefully early May also we enjoy the spectacle of the Common swifts and Fieldfare for insects to be peak. At that time almost all the summer visitors are here. On the rocks that make up the closure of the reservoir at various points we see Northern wheatear.

It will be after reproduction, from the end of July, everything August to mid September when the maximum flow is generated in migratory passerines. Elusive and rare species such as Grasshop per warbler and Savi’s warbler and the Bluethroat they cited every year here.

Today, nevertheless, the population has been evacuated much and we can not see the image of Black-bellied sandgrouse flying over the reservoir and stopping to drink water. Nor bitterns and raised on the slopes and fields adjacent to the water surface.

To see these species -and perhaps the Little bustard also- the best is to travel the road between Monteagudo with Almaluez in spring and make a stop in one of the ways we meet. With a little luck we can see, in addition to the ubiquitous and very beautiful Calandra larks in their nuptial flights, the fleeting passage of a pair of grouse or get out a male of Little bustard. 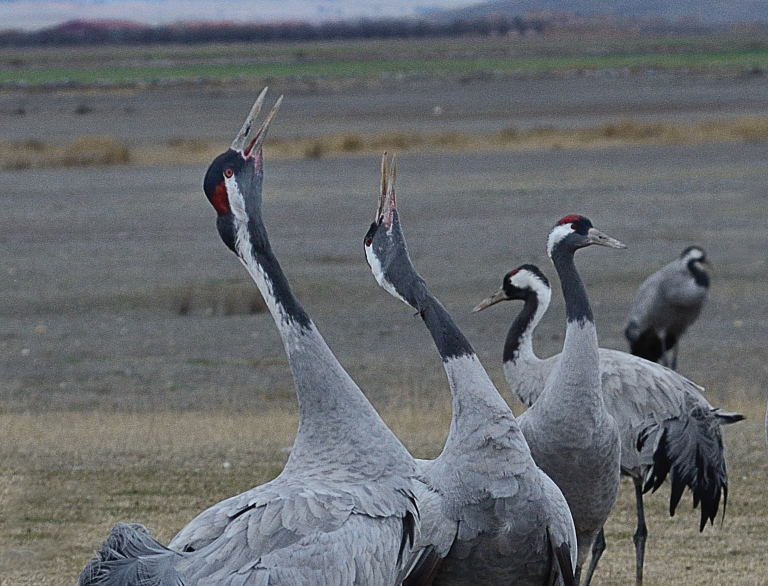