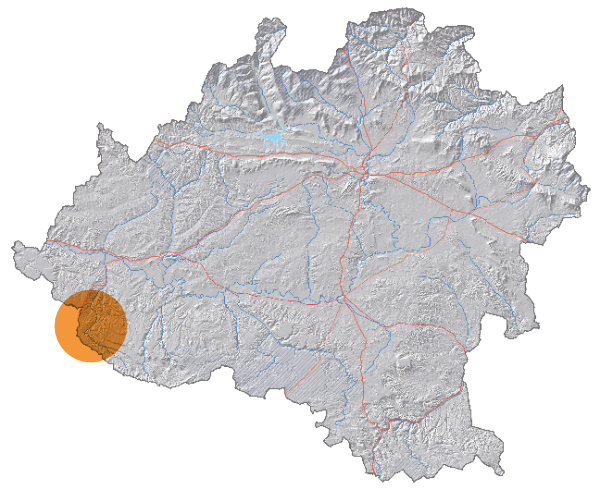 Location and access: A 105 Km. in SW Soria, in the Land of Ayllón. It accessed from Soria N-122 to San Esteban de Gormaz where you take the National 110 until near the village of Ayllón in Segovia. Before reaching it, the road to the left takes us mark Tiermes. Cuevas de Ayllón and / or Ligos, They can be our destinations. On Highway Burgos, from Madrid it is located 150 kilometers.

Status: He does not have any form of protection. It would be part of the IBAS network (Important Bird Areas in its acronym in English) of the Spanish Ornithological Society, within the wide space Tiermes-Caracena IBA 076-.

Difficulty: Medium. There are no paths or roads in various parts of the sickles, so that routes can be mediated by this circumstance.

Visit duration: Varies as the visit may be extended if we choose a broad overview of the various sickles. specific approaches can lead walks around the hour / two hours.

Time of visit: Spring is the best time to visit these gorges and valleys.

Comments: The roads are often in poor condition so during the rainy season we will not move much for them with vehicles to avoid traffic jams or accidents. You also have to exercise extreme caution on roe deer hunting days - which are all those in spring -; flashy clothes, showy, -nothing colored camouflage clothing- best to move safely, because birds will give them just a little while we behave properly without walking near the nests, or shout, etc. 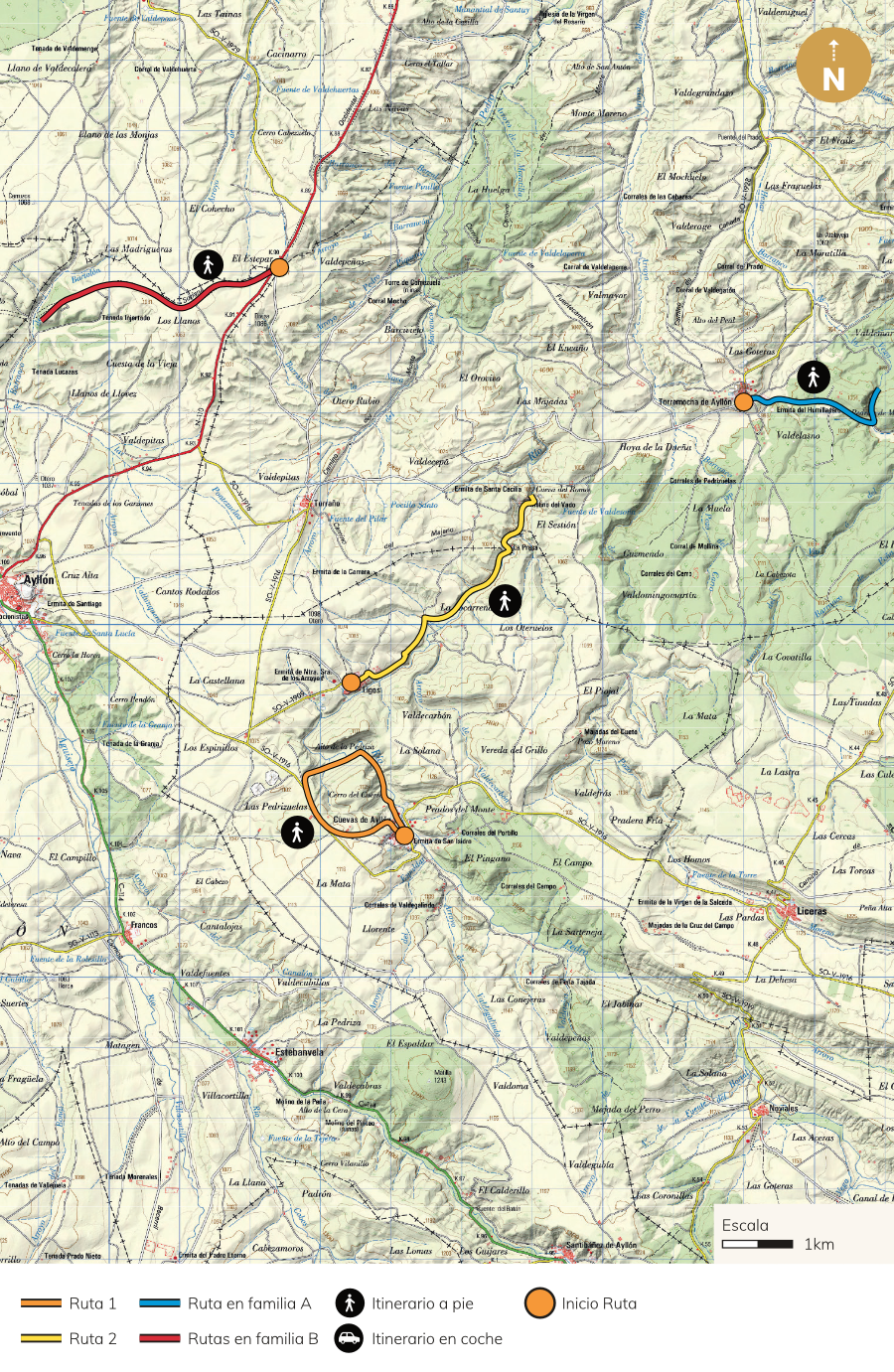 In this part of the southern province of Soria is one of the most beautiful gorges that we can visit, punctuated by Pedro River on its run between the towns of Cuevas de Ayllón, Ligos and Torrano. The landscape is dominated by junipers forest, small fields, and holm oak forests, and precious woods of poplars and aspens wedged between red sandstone and limestone so characteristic of the Sierra de Pela.

We propose two itineraries, which can be shortened at the user's convenience:

1The first would leave from Cuevas de Ayllón a path that goes parallel to the river along the left bank. Here we will notice one of the characteristics of the banks of the river Pedro throughout this sector is that it becomes quite difficult for him to walk, since many of the roads and paths have been lost. Only if the river falls overgrown advise against this option because it will be impossible to some area. In this way we, just as would one kilometer long, to place ourselves in front of the cut of Ligos pedriza. A path that appears on the left bank let up the slope and exit to the local road where we can return to Cuevas. It should stop and look at stone landscape when we get to the highest point since, the sight, well worth.

2The second route would depart from Ligos, through a road that goes over the river, on the left bank of the same. This road will lead us, approximately four kilometers, Torrano to mill and has the appeal that crosses almost all habitats of this area, including a small residual wasteland where still appears Dupont's lark. From the mill we can walk a bit along the bottom of the gorge, although we will reach a point where we can no longer pass. We could go back the same way we brought or, playing with two cars, He has left one on the road linking Torraño Torremocha de Ayllón, just over the bridge which crosses the river Pedro.

AGorge of Viñas Viejas in Torremocha de Ayllón. Torremocha de Ayllón is a small gorge, very accessible, although precisely this accessibility means that we have to be careful breeding season not to annoy or disturb too much with our presence. We take a path in good condition coming out to the east of Torremocha and take us to the road Morcuera to Liceras.

About 2 kilometers we will have the small gorge limestone to our left, camouflaged among quite large junipers: Barranco de Bocalavoz as it is known in the area. Here we will have the typical rupicolous bird fauna represented by: Griffon vulture, Egyptian vulture, Red-billed chough, Rufous-tailed rock thrush, Blue rock thrush, Eurasian eagle owl... all in just two large walls that are forming this gorge, always dry, of the Vega canyon

BCañada Real Soriana Occidental. This Cañada Real appears in all its former glory on the border of the province of Soria and Segovia, preserving in this section all the original features in extension and width. These lands of the municipality of Ayllón and conserved as only natural vegetation between intensively cultivated land. This does serve as a place of refuge, feeding and breeding of some species characteristic of these environments as larks, Calandra lark, Crested lark, Thekla lark, Northern wheatear, linnets, yellow wagtail ...

The most interesting observation, we do not know for how long, will be that of a male Little bustard. From mid-April to late June, sisón males had their leks along this stretch of canyon. Does 2 only years could be an already. A species that is disappearing in recent years before our own eyes.

The winter It is a hard stage in these valleys and moors. Only in the area of ​​the  juniper forest that looms large in the area northeast, to Torremocha de Ayllón, there is more movement given the good supply of fruit that gives  juniper forest winter birds. Good sides of thrushs, Common blackbirds, magpies and other birds you can be observed here. At this stage also the Griffon vulture and the Eurasian eagle owl They begin their breeding period.

February it is the month in which, some timid start to notice changes in the environment with the appearance of some Wood larks in any of the open forests of the region, or Crag martins in the gorges. In the riparian forest of the river Eurasian nuthatches -recent settlers- they are the most active, although there are Great spotted woodpecker and European green woodpeckers.

March and we anticipate the arrival of spring. Wintering birds are leaving the area and they come in other, like the European serin and the Black redstart in these lands behave as partial migratory species. If there is a characteristic bird of the canyon is the Egyptian vulture. Three couples by different cut are distributed to the least and when they arrive in march, being seen standing on the rocky areas without major problems.

These also rocky areas are being occupied by birds that have gone back and forth in Autumn Winter but what, at the call of reproduction, they reoccupy holes and cracks: the Red-billed chough and Western jackdaw, the latter increasingly scarce. Perhaps the decline in the sheep population has to do with this other observable part rarefaction elsewhere in Soria. The Ravens they are the lords of the canyon, chasing and harassing even the Golden Eagle if it enters its territory. Also some Peregrine falcon you can still be, little, gorges.

In May and June we can observe Blue rock thrush, Rock sparrow, Stock dove, Common kestrel and Rufous-tailed rock thrush. It is at this time when the reproduction of these species reaches its peak and rocky cliffs are filled with different life and songs.

In July and August walks through valleys, fields and paramo will be the perfect complement to have spectacular days here. On the uplands, specifically cited in Torrano, - along with Dupont's lark, there are Black-eared wheatear, Greater short-toed lark, Tawny Pipit, Ortolan bunting, Spectacled warbler and Orphean warbler -it is also in juniper scrub- ...

On the banks of the río Pedro, we will have a choral symphony of many species of birds that will have arrived in those months: Common nightingales, Common chiffchaff, Robins, Spotted flycatcher, Golden orioles, Woodchat shrike and Red-backed shrike…

Chapter raptors have Montagu's harrier to the fields of Ligos and Torraño, Common buzzard and Booted eagle, furtive Eurasian sparrowhawk and the Short-toed eagle. Rarer hearing will be the Red-necked nightjar, detected in recent years in this area with the most abundant European nightjar. The Eurasian scops owl also they accompany our ears at that time because it is a common species in these banks still. 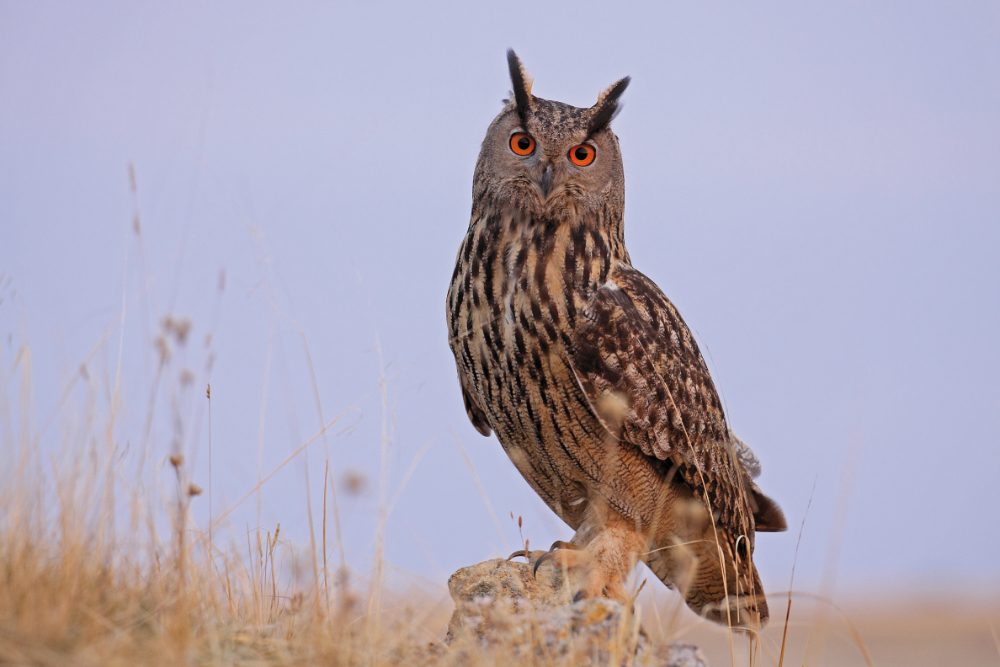