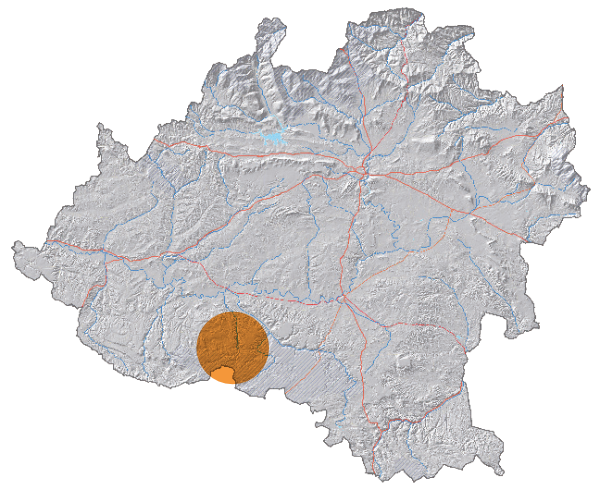 Location and access: From Soria would have to reach Berlanga de Duero, and from there, continue along the local road SO-100 after traversing Paones and Alalo, reach the road to SO-132 which is directed to Barahona. A 1,5 Km. would the people of Lumias, starting point of the space recommended.

Terrain: Small cannon limestone carved by the river Talegones between Torrevicente and Lumias. The river is accompanied by a lush riparian vegetation.

Means of access: The only way to approach these two peoples is by our own means, since there is no public transport.

Difficulty: Limited. Only after heavy rains, where the swollen river go, we have difficulty following the path, as stones and logs are used to pass from one side to another they may be covered by water.

Visit duration: Variable, depending on our interest, although the proposed itinerary, round-trip journey can take us 4 to 5 hours.

Timing: Spring and autumn are the ideal times to observe the most typical birds. Extreme summer conditions, but especially winter, inadvisable approach

Comments: None of particular interest. 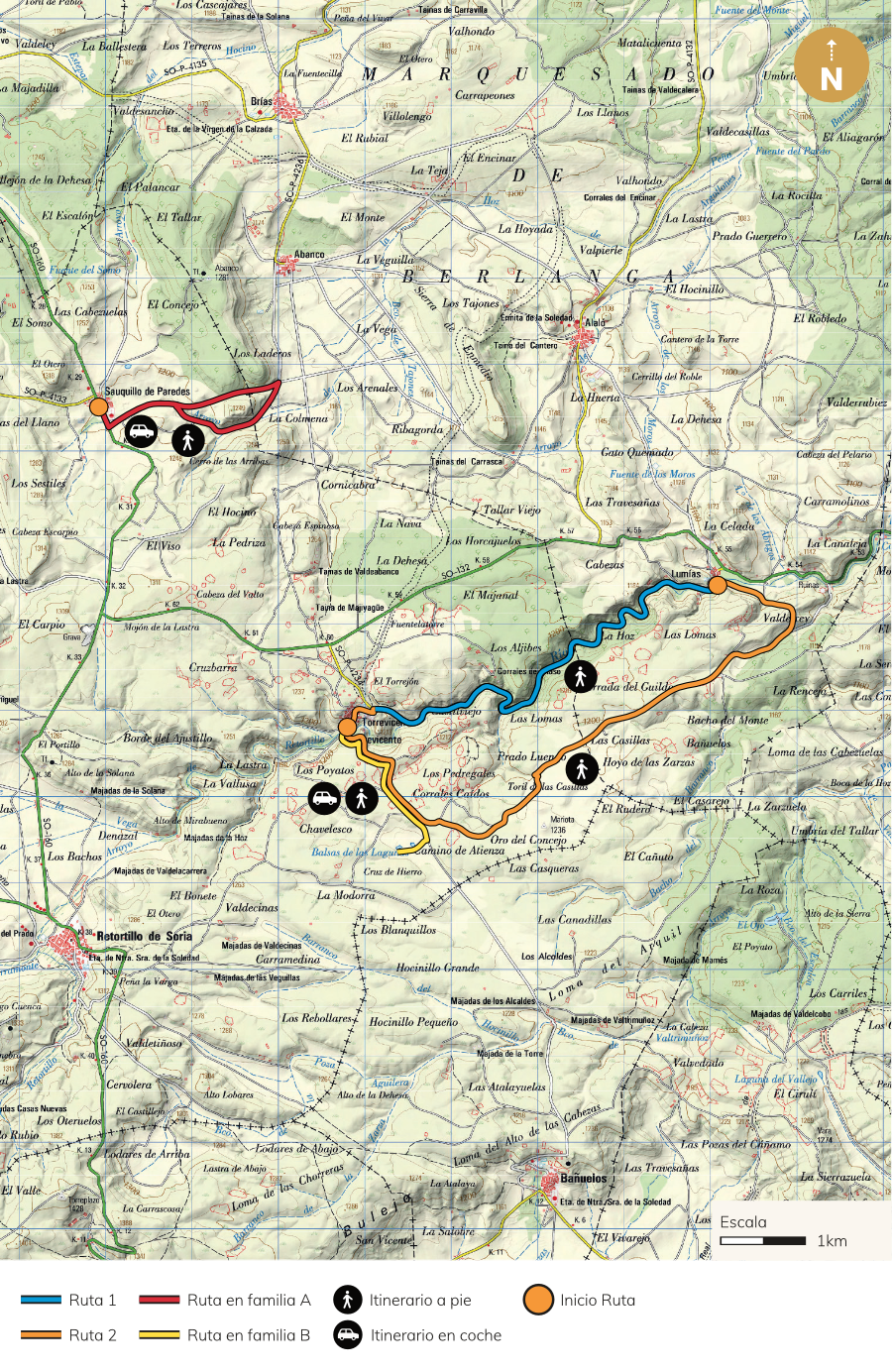 One of the most typical landscapes in Soria constitute by gorges, and canyons. The increased proliferation of canyons we have in the southwest corner of the province, where rivers are born in the Sierra de Pela and its vicinity they have drilled in the limestones of the Jurassic and the Cretaceous before reaching the waters of the river Duero. One of these examples is the river Talegones, forming a rather narrow valley all the way from Retortillo to Aguilera.

Thus, together with the pure and simple of the environment Torrevicente bad land where we can hear and hopefully see the Dupont's lark and other steppe birds, the banks of the river Talegones include black poplars, aspens, maple, oaks, while climbing the slopes oaks. In the vicinity of the town of Lumias, orchards, walnut and fruit trees, although many already abandoned.

1 The main route composes the path to walk the banks of the river Talegones between the two peoples who for years is a secondary branch of the Sendero Ibérico Soriano (GR86). They are approximately 6,5 km to tour the whole gorge, it is able to indifferently from one village or another. If we do in the morning, it is best to leave Lumias to have the sun behind us.

2 For more walkers, made the choice that ends Torrevicente, the best would be back for a path through the wilderness surrounding immersed in a sea of ​​stones torn by man to build walls, shed for sheep. The route back, which reaches an old mill water under Lumias, will be almost 9 kilometers, but it quite worth.

A Cerro de las Arribas-Arroyo de la Hoz. A northern gorges the river Talegones, to the east of the town of Sauquillo de Paredes, the Arroyo de la Hoz is located. It is a dry stream, steppe environment with its slopes covered in bushes and walls, in this case very small, but enough to accommodate another community with interesting rock birds vulture, Egyptian vulture, Red-billed chough, Rufous-tailed rock thrush and Blue rock thrush.

On the slopes, the Dartford warblers and Sardinian warbler they are present all year, and the Spectacled warbler, Subalpine warbler and Western orphean warbler in summer. Access is well down the track linking Sauquillo de Paredes with Abanco. You should go at moderate speed on these roads and keep to the road with the vehicle .

B Bad land of Torrevicente. The journey through the gorge and the wasteland is ample to do with young children and / or in a short time. The best choice is up to the moor by car taking a road in good condition coming out of Torrevicente. We can leave the vehicle immediately upon arrival here and walk through this seemingly endless plains, a stony plain, both soil and multiple shed for sheep to see and which are ideal for the observation of Black-eared wheatear and Northern wheatear.

The best time is late spring, May to June. The explosion of life in the wilderness and the Tawny pipit, Greater short-toed lark, Eurasian skylark, Thekla lark, Dupont's lark... give us a concert. Half a kilometer walk and reach an area where the crop Calandra lark and Corn bunting abound; if the year is rainy, we can carefully approach two small rafts - the lagoons- which may also give us some aquatic species, as the Mallard and the Water rail.

In winter we can see the little colony vulture, the Red-billed chough and Western jackdaw that exists on the entrance road to Lumias. that visit, with the people, their pigeon house and their environment can be made at any time of the year.

In the middle of the month March the chickens vultures are about to be born and Egyptian vulture they will be coming to their old nests. It is not uncommon to see the Peregrine falcon sharing flights with Golden Eagle or listen to the song of the first Blue rock thrush. According progresses April the movement, both the canyons and the forests will increase with new species that are coming. Common cuckoo, Eurasian wryneck, Tree pipit in addition to Robins, Eurasian jay, Hawfinch and Eurasian nuthatches, European green woodpecker and Great spotted woodpecker. The Tree pipit and Red-backed shrike they are emerging, as in many other areas of the southern province.

The shady characteristics of these forests make them a good refuge of these species more northern areas. Therefore the contrast is spectacular if after we take a stroll through the surrounding moorland. Disappeared all traces of vegetation, is the kingdom of larks as Eurasian skylark, Greater short-toed lark and the Dupont's lark, the Tawny Pipit, the Black-eared wheatear and Northern wheatear…

In May and June we can see and hear virtually the same species.

In summer species are maintained and even stop singing, It is not a bad time to take a brisk walk early in the morning, before long hot sun and enjoy numerous family camps. We will have to watch out for puddles that may have become of the river because there will attend many birds to drink.

And that, however much it has rained in winter, is usually normal being that the river carries water in summer, at least, at its central section. If you can do it in Lumias since there are springs above the village.

Already end of summer the postbreeding step is pretty good with observations of birds like Pied flycatchers and Northern wheatear, nets, European bee-eaters, warblers... in the bad land they will be in Torrevicente the Little owl and maybe Eurasian dotterel, bad lands sharing with the coming of Guadalajara and Retortillo-Madruédano.

And just for the color of autum, with that reddish color so fantastic Montpellier Maples, also worth a visit. The Ring ouzel they are not difficult to observe in some parts of the canyon also in April-. The last Crag martins will remain until early November and perhaps some Blue rock thrush.

After that, according arrives December, again the natural cycle with Griffon vulture and the Eagle owls who played the heavens, although at times of the day very different. 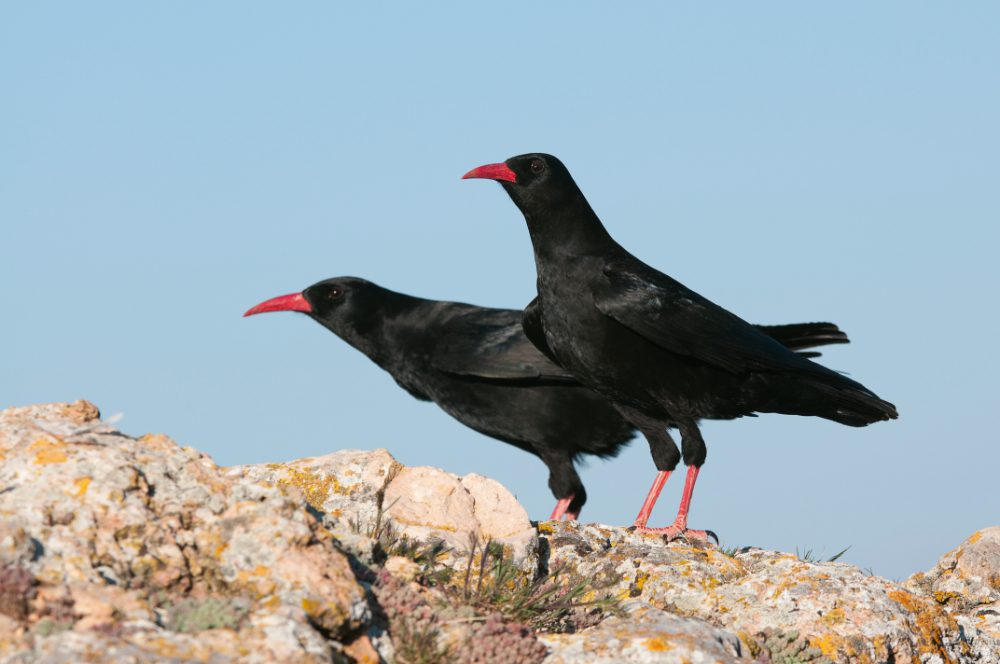