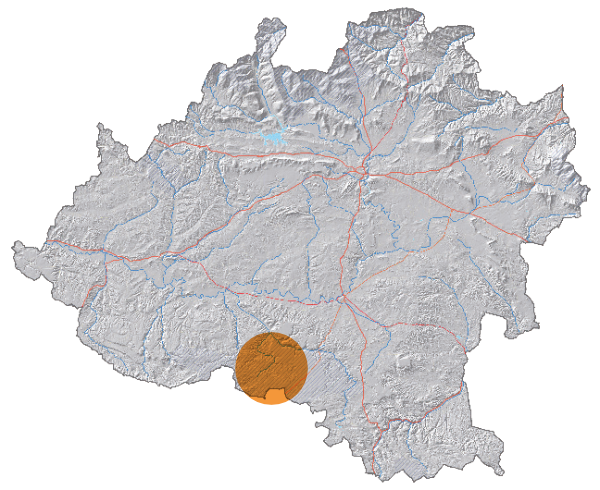 Location and access: In southern Soria, access to Rello is performed, well Barahona, situated in the C-106, where you come from Almazan or from Jadraque if we came from Madrid. Also for La Riba de Escalote, through a series of local roads from Berlanga de Duero for accessing from the rest of Castile.

Status: The whole area is integrated in the SPAs "Altos de Barahona".

Difficulty: Any. Public roads and absence of fences.

Visit duration: Complete observation of the area may lead to 5 to 6 hours.

Time of visit: Highly recommended spring Central: May and first half of June, dates ideal for watching steppe birds. the visit is not recommended in winter, therefore the prevailing cold as the widespread absence of birds. Some sedentary considered on the plateau disappear, species such as stonechat, the Blue Rock Thrush, Woodlark, the black redstart, etc.

Comments: Given the small size of the walls where they raise some species like vultures and Egyptian vulture, much discretion is required when you leave for the valley 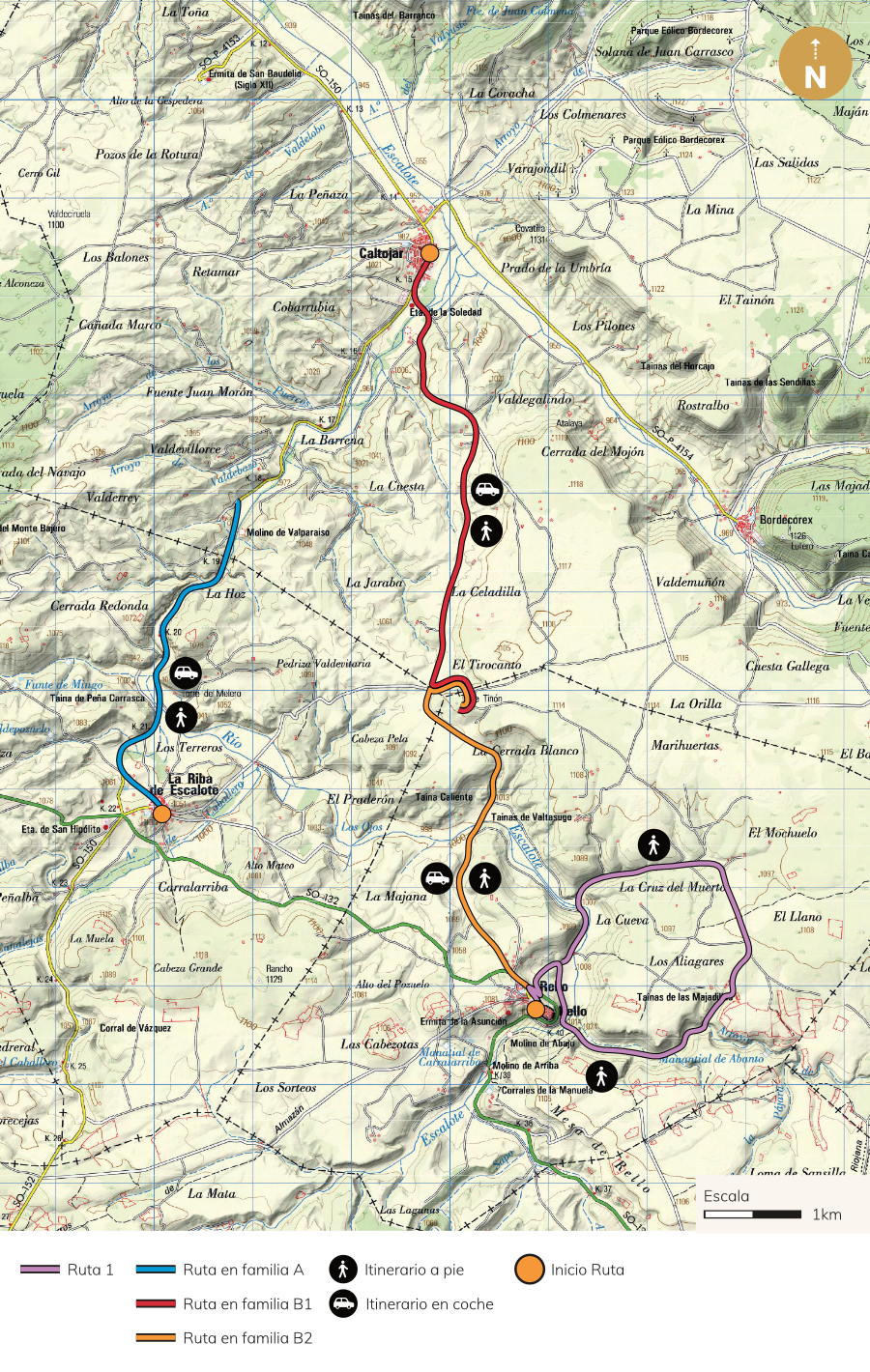 Soria is one of the last refuges Spanish Dupont's lark, counts in our province with one of the best Spanish populations. This can be seen very well in these wastelands in southern province, which still survive dilated extensions "wastelands" settled well in the tertiary bad lands plateau or on the surfaces of the secondary ravaged by erosion.

On both surfaces, river Duero tributary streams have carved out modest valleys depending on the power of rocks and small canyons create gorges like La Hoceca, born in Alpanseque that comes to die in the waters of Escalote, near the walled village of Rello.

Next to the rock birds the place is ideal for watching in a small space Rufous-tailed rock thrush, Blue rock thrush and , in times, Black wheatear. The highlights are the wastelands surrounding the gorge, where it survives one of the most outstanding stocks Dupont's lark in Soria. In these bad lands you can see Stone-curlew and a variable population Little bustard they displayed by these cold lands in the last days of April and early May. And with luck, one of the few Black-bellied sandgrouse remaining.

1 An itinerary that departs from Rello proposed, GR86 following a step that would lead to Marazovel-Alpanseque, rising for three kilometers by the valley of La Hoceca - "Hoz Seca" on many maps, Hocecillla also appears in other- until reaching an area where some paths ascend the right bank of the stream it is observed up to the wasteland. From here, it would turn to the starting point between large and small surfaces moor farmlands, through a raceway first and then longer fit for vehicles.

A Hoz de la Riba de Escalote. The Escalote river continues his wandering north and, after passing through the village of La Riba de Escalote and collect water from the source through a gorge of Salobral pierced by its waters and which also runs the road linking the region with the lands of Berlanga.

The river always carries water and vegetation live Mallards, Water rail and Reed warbler, not always easy to observe. So the most interesting will be here the proximity of the colonies of rock birds that populate the gorge, since the Griffon vulture, the Western jackdaw and Red-billed chough, passing by Crag martins, Rock sparrow, Rufous-tailed rock thrush and Blue rock thrush…

B Torre Tiñón. From Caltojar (B1) south or from Rello (B2) we can go down a road in perfect condition until one of the watchtowers that existed in the Arab region: the Torre Tiñón. It is this one that has been restored and, carefully, we can go up to it and make out the full extent much of the moor.

The view reaches many kilometers around and here we have good observations as prey vultures and the like and, even, hear Dupont's lark, as well as other steppe birds in the area: Tawny pipit, Greater short-toed lark, Northern wheatear and Black-eared wheatear -in spring / summer- with larks, Rock sparrow, Carrion crows and linnets, the rest of the year.

Spring is the best time to enjoy the variety of birds in this space.

Warblers paradise. A short walk in the early hours of the month May, between the banks of the river Escalote in Rello and the bottom of the canyon valley, slopes covered with scrub will give us the opportunity to observe almost all existing warblers in the Peninsula. Only Common whitethroat would not raise here, being able to see in both steps broadly. The Garden warbler and Blackcap will not move the cool environment of the forest of aspen and deep valley appear warblers Subalpine warbler and Western orphean warbler, these also in one of the higher densities can be found in the northern half of the peninsula.

For a few years observed Sardinian warbler they have in these thermophilic valleys south of the province one of the few redoubts in Soria. The Dartford warblers it seems scarce, but they are still rare and so does the Spectacled warbler, warblers here should be called "aylagueras" by reliance on that bush. This paradise shrub develops on the bottom and the sides of the valley is used by other species as Melodious warbler, Woodchat shrike and Ortolan bunting. This makes the approach in the months of May and June a real treat.

Dupont's larks. If we talk about one of the best areas of Dupont's lark, not only here but in Spain, it is logical that give clues about when is the best time to observe them, knowing, beforehand, this is very difficult for the elusive behavior of the species itself and its retracted customs and crepuscular.

From here we remember that it is totally prohibited the use of claims and recordings in order to attract this bird to our position. It has been scientifically proven that, this use, reproductive failures may lead some couples, breaking eggs from her nest the male of the couple, to fear that he is not, yes true father and other close male.

Having said that one must know that detect the Dupont's lark it has no problem, because few species have such a characteristic song and so far-reaching.

The largest issue of singing which has a territorial purpose- It occurs during the previous hour and a half at dawn. If February has good morning, anticyclonic and clear, and you can hear some of these songs. In March the same will lavishing more, generalizing in April, with a peak in May and first half of June.

The highlights of the sing be before dawn does not mean that after, and with daylight, not sing. makes, and at the peak of estrus, it does a lot too. Sings from the air as other larks but during the day most of the time it does so from the ground, or protected from the view atop a stone covered by a bush. There have to be patient and try to locate the innkeeper from singing, as some are located very close to the main roads crossing the wasteland.

In summer is very difficult to observe because the heat, and the rest of the birds, it makes largely cease their activity. Since mid-September / October a small spike occurs in the song of the Dupont's lark to cease in November-December. In those times, a tour of the moor can be frustrating, good morning even for just see birds.

Since the mid May until the mid June We can also hear some Little bustard, and perhaps the last for, if no one remedy and it seems that no, It is a species that will disappear, not only here but in many other places in Spain.

The last stroke of the bad lands are the recommendation to make a brief tour in late summer, from the 20 from August until the 20 from September approximately. In those dates and we will note passerines step: martins, swallows, wagtails, Whinchat... causing the diversity of birds increase. However, There is a regular visitor who chooses these moorlands to make a stop on the way between his native tundra and African enclaves in which spend the winter: the Eurasian dotterel. Bandos up 30 copies have been cited in the farms extending between Rello and Barahona. 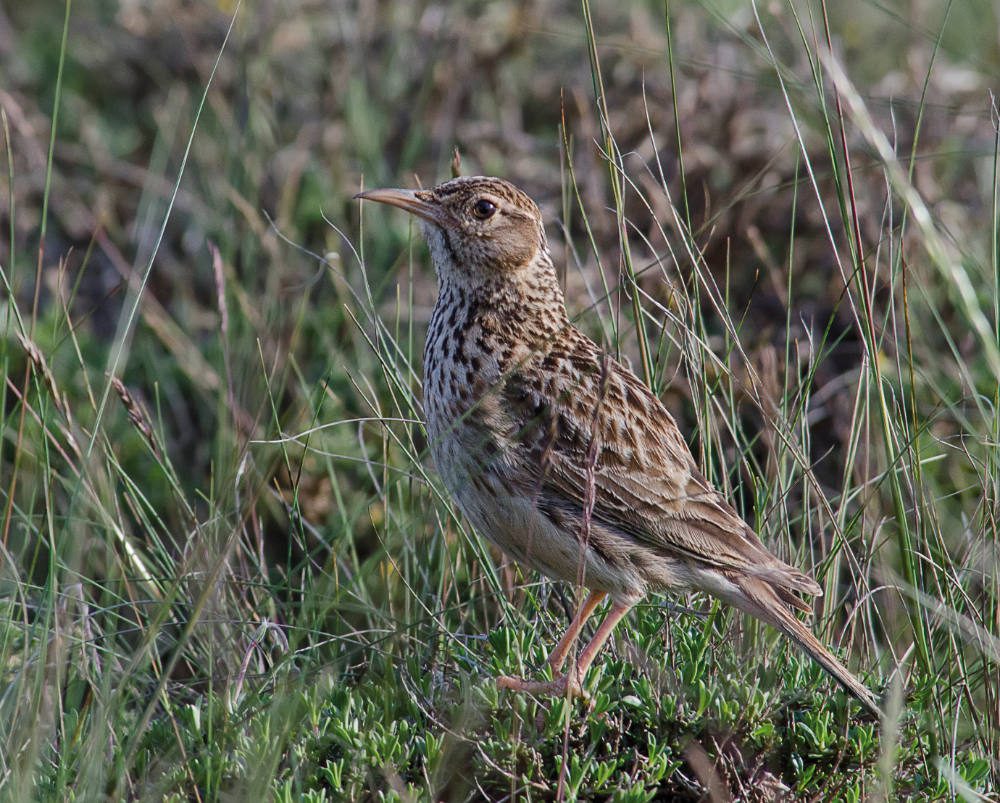