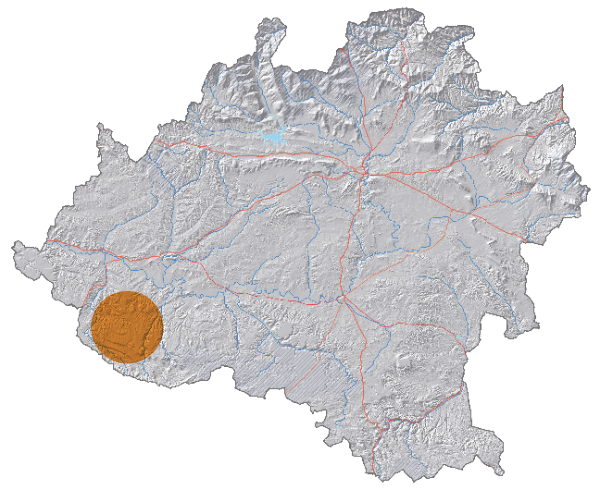 Location and access: A 100 km, in SW Soria, accessed from the N-122 to San Esteban de Gormaz, where the SO-P-4003 is picked up Montejo de Tiermes. From this point Madrid is also achieved by A-1 and then the N-110 to Ayllón and SO-135 to the archaeological site of Tiermes, which it is the center of this area, although the main focus is his successor in time, Montejo de Tiermes.

Status: There is no form of protection in this space. For many years the declaration sought as SPAs this space, but he did not set the idea. It is within the catalog of important areas for birds in Spain: IBA-076 "Tiermes-Caracena".

Terrain: The foothills of the Sierra de Pela, where do we meet, It is a succession of hills and valleys covered by scrub thickets and forests regenerating oak. Rivers and streams have shaped the sandstones of the Triassic creating a very distinctive landscape, a landscape of red crags.

Difficulty: The roads are often in bad shape so, except the main one, It is not advisable to take them by car in rainy season.

Visit duration: It is a large area, allowing specific approaches or walking tours and / or cycle that can take at least half day.

Time of visit: Both spring and autumn are the recommended times to visit this space. Winter is hard and short on species and in the summer months, the heat is not as strong as in other areas, but the bird activity also decreases a lot.

Comments: Although it is a standard that could be applied to many other spaces, as a general recommendation must be very attentive to possible raids in the general hunting season-from October to February- and roe deer hunting-from April through August-. 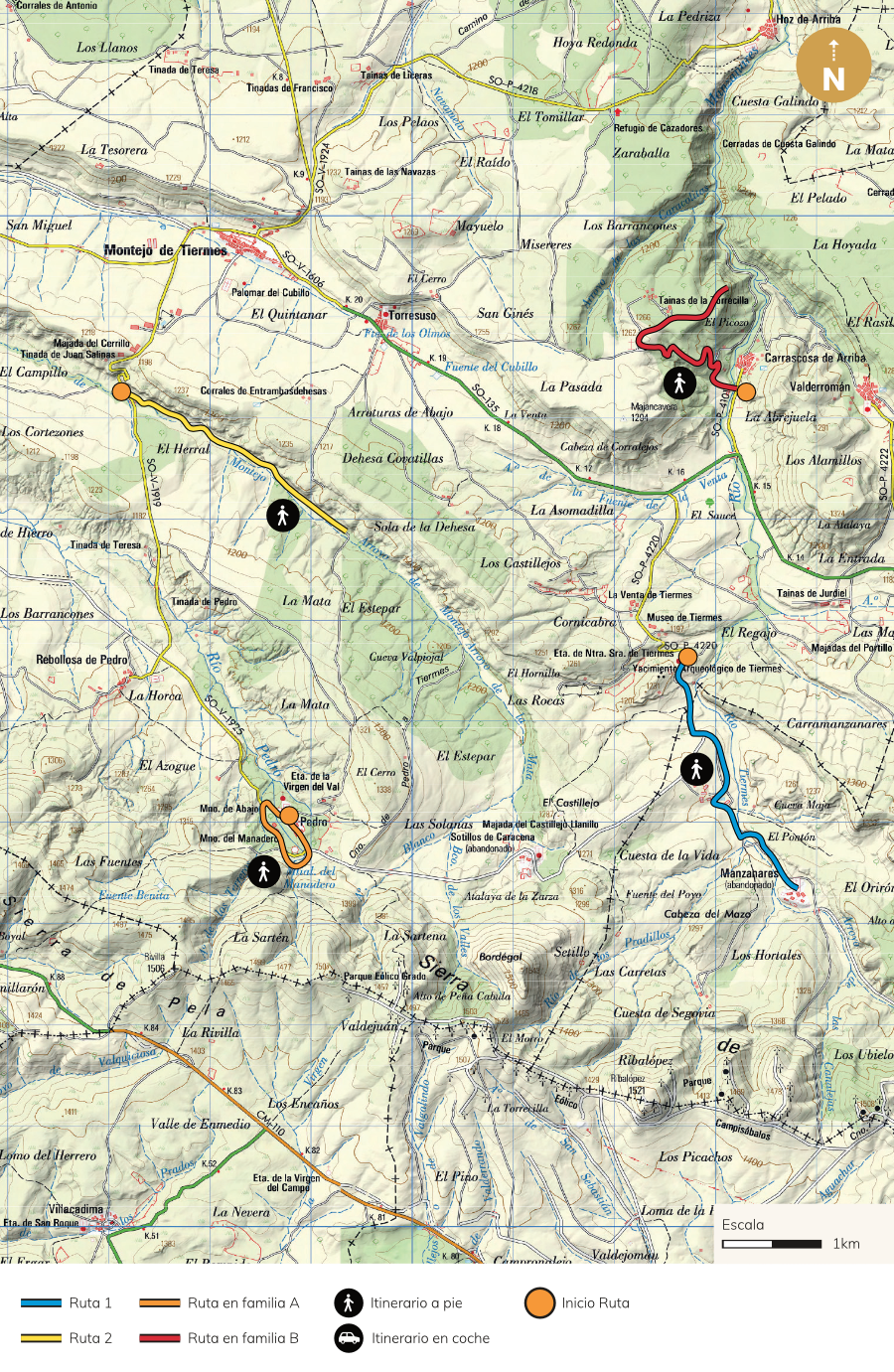 The region of Tiermes is one of the most depopulated of already if depopulated province of Soria. Several villages are completely deserted and abandoned we could see in this region formerly dedicated to cereal cultivation and abundant subsistence sheep farming. The abandonment of these towns has led to a very substantial increase in forest area, some pines of repopulation and oaks, as vegetation is optimally, although in many cases we have are extensive Cistus scrub formations, many disadvantages if we want is to walk through them.

With everything, the most striking and interesting for birders are the vast string extending sandstones, between the head of the río Manzanares and Tiermes, as an extension of this training, between the reservoir and Cuevas de Ayllón, along the Arroyo de Montejo. That's where we should direct our steps to see the rich community of birds that inhabit on the rocks, especially wide like as, Griffon vulture, Egyptian vulture and Common raven.

1 The first comes from the same site of Tiermes and still marks the GR86 trail to the abandoned village of Manzanares, distance of about 3 kilometers where, In addition to the rock birds commented, we have a small mixed forests, with aspens and oaks, attractive enough for many birds, especially in the spring.

2 For the second round, we would catch the road leading from Montejo de Tiermes towards Pedro. It is interesting to see how from Montejo not observed at any time the cut sandstone, because they only have part of his face steep south, north face being ridged surface one, with zero slope reaching crops and pastures to the base. The low road to reach the arroyo de Montejo and this is where our journey would depart, up stream, following a path on the right bank which leads with a perfect view of all escarpments. Please do not get out of the track, especially during breeding every month, January to July, as vultures nests are highly visible and sensitive to noise and disturbance that would lead our simple approach. In 2018 SEO-Soria censused this area and were obtained 121 breeding pairs, the best area of ​​vultures in Soria, only after the Cañón del Río Lobos.

A Source of the río Pedro. Pedro village lies at the foot of the Sierra de Pela. The source is just before the village, a karstic upwelling that in times of rain favors the exit of a good water flow. This rising río Pedro "rushes" quickly around town, forming small waterfalls and rapids, all with the accompaniment of lush vegetation: poplars and aspens, but also small orchards and meadows separated by fences with abundant walnut trees.

B Portuguese Oakwoods of Carrascosa de Arriba. The valley of the river Manzanares is one of the most beautiful all the way, since its source in the village of the same name and it flows into the river Caracena, Fresno de Caracena. In Carrascosa and Valderromán, the valley is covered on its slopes of towering holm oaks and portuguese oaks .

The largest portuguese oaks are on the slopes we see, west from Carrascosa, we can go up the road, before reaching town, out across the river towards Torresuso. A walk along this trail, out of the valley from the top of the hill Picorzo, or both are highly recommended options. In portuguese oak tree forms occasionally a roosting Griffon vulture, the company Ravens, Carrion crows and some Kites. Nuthatches, Eurasian jay, Chaffinches, Great tit and Blue tits are the most common birds there throughout the year.

In spring we can see Bonelli´s warbler, Subalpine warbler and Western orphean warbler while, in autumn, sides of Common woodpigeon and Mistle thrush They are felt especially if it is good year of acorns.

December January. The star of the heavens at this time of the year is the vulture. Known as "Abanto" in much of the province of Soria, it is on clear days of December and January its annual estrus, where couples, faithful throughout his life, renew those ties of commitment and we fly unison, uncouth repair their nests or copulate with energy in rock faces.

At sunset, and with a little luck, we can hear the songs of territorial Eagle owls, species that has had a significant increase in their populations.

March. Althought the vultures are the greatest occupants, in every sense,- on the skies of the region, over March, they appear in it their African relatives, the Egyptian vulture. Three-four couples are living in these rock faces, doing something fairly easy observation, even, when it is a cultural visit to the site of Tiermes.

Right there we can see from this month, the arrival of the other species to make the rocky crags home. First Crag martins, progressive and temporary disappearances so if the rains and cold make their appearance for several days. At the end of the month, will come the Blue rock thrush, males, they are claiming their songs through the possessions of other years. This occupation is relatively recent. Ya, in these dates, the Ravens recompose walk in his usual busy nest. And will the little nest Peregrine falcons, although these are very rare here.

April. One of the species that have disappeared from this area are the Western jackdaw. They must be once very common, raising in all cut from this area and many nearby. Today we see a couples-and also increasingly- from Red-billed chough, with Rock sparrow and Spotless starling. Towards the end of the month will come the Rufous-tailed rock thrush, spectacular bird in both its colorful and zeal flights carried out and end up with multicolored parachute descents.

Few years ago, new tenants have sought shelter in the "caves" of the cliffs: they are the Red-rumped swallows. The first nests were here early this century, since then, they have been established on a regular basis.

May. Is a key month for, along the same, all they shall walk and entertained with raising, one way or another, starting in late and more birds and chickens grown in cases of vultures and hawks. It is well to recall the warning not to go near the nests of these species -well, no in general, periods because they are very sensitive and there is no reason to allow us to disturb.

The Black redstart perhaps the most abundant passerine in these chaotic media rocks near the Northern wheatear, who prefers accumulations of stones, buildings, etc.

June. The most boisterous in the rock faces, in the hedgerows, in the woods. The first half and will fledglings of many species and still not tighten much heat. Vultures and Egyptian vulture still they have chicks in the nest until July and August respectively but other species are at key moments in their breeding.

And around, many other birds, we guarantee a while rather than entertaining. Red-backed shrikes, Hoopoes, European bee-eaters, European green woodpeckers, Golden orioles…