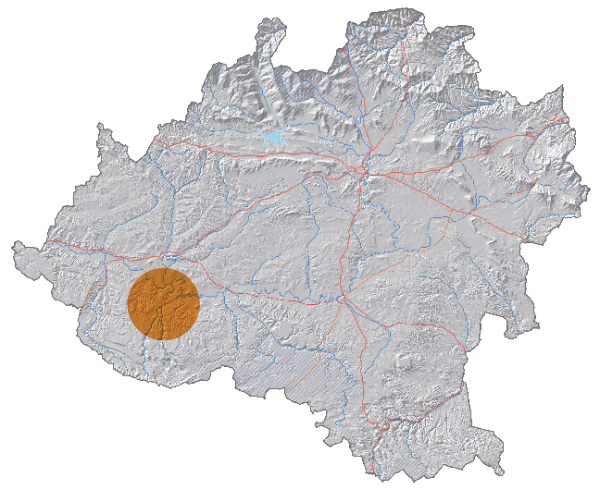 Location and access: About 70 km of Soria city, in the central-western province, local race Soria accessed from the SO-100 to Berlanga de Duero where it gets traversing Aguilera, Morales to village of Recuerda. From here, the road to Fresno de Caracena and diversion to Vildé. It can also be accessed from the Burgo de Osma and San Esteban de Gormaz to the village of La Rasa and road Caracena, through Navapalos.

Status: There is no form of protection in this space. He is part of the IBA "Tiermes-Caracena" as mentioned in other nearby areas.

Terrain: In full banks of the Duero, on grounds plains, relentless erosion resistant, cretacic various domes calls here pedrizas. Pedrizas have seen those rivers that have created small gorges and little canyons or break the monotony of these lands. Here is the river Caracena which, in its final trajectory, It has become one of the most beautiful rock faces all there in this sector.

Means of access: In own vehicle to the surrounding people to the observation area, localities like Vildé, Villanueva de Gormaz and Fresno de Caracena. From here all proposed routes and approaches will be made on foot or by bicycle, given the poor state of roads.

Difficulty: Limited, but if we walk in the limestone, we wear good shoes because there is a lot of stone on the surface.

Visit duration: In two or three hours it can be the central and important core space.

Time of visit: Although spring may be -that, in fact- far more interesting to get close to this place, we do not believe that any time of the year is bad, even in midwinter.

Comments: The existence of a small reservoir in the center of the gorge makes the path that goes to the side of the river disappears and "force" a walk up the slopes of the pedriza and we can be virtually foot of the cut. In breeding season this can be very annoying presence for birds that are breeding there so this action is not recommended, can make the trip taking a little detour. 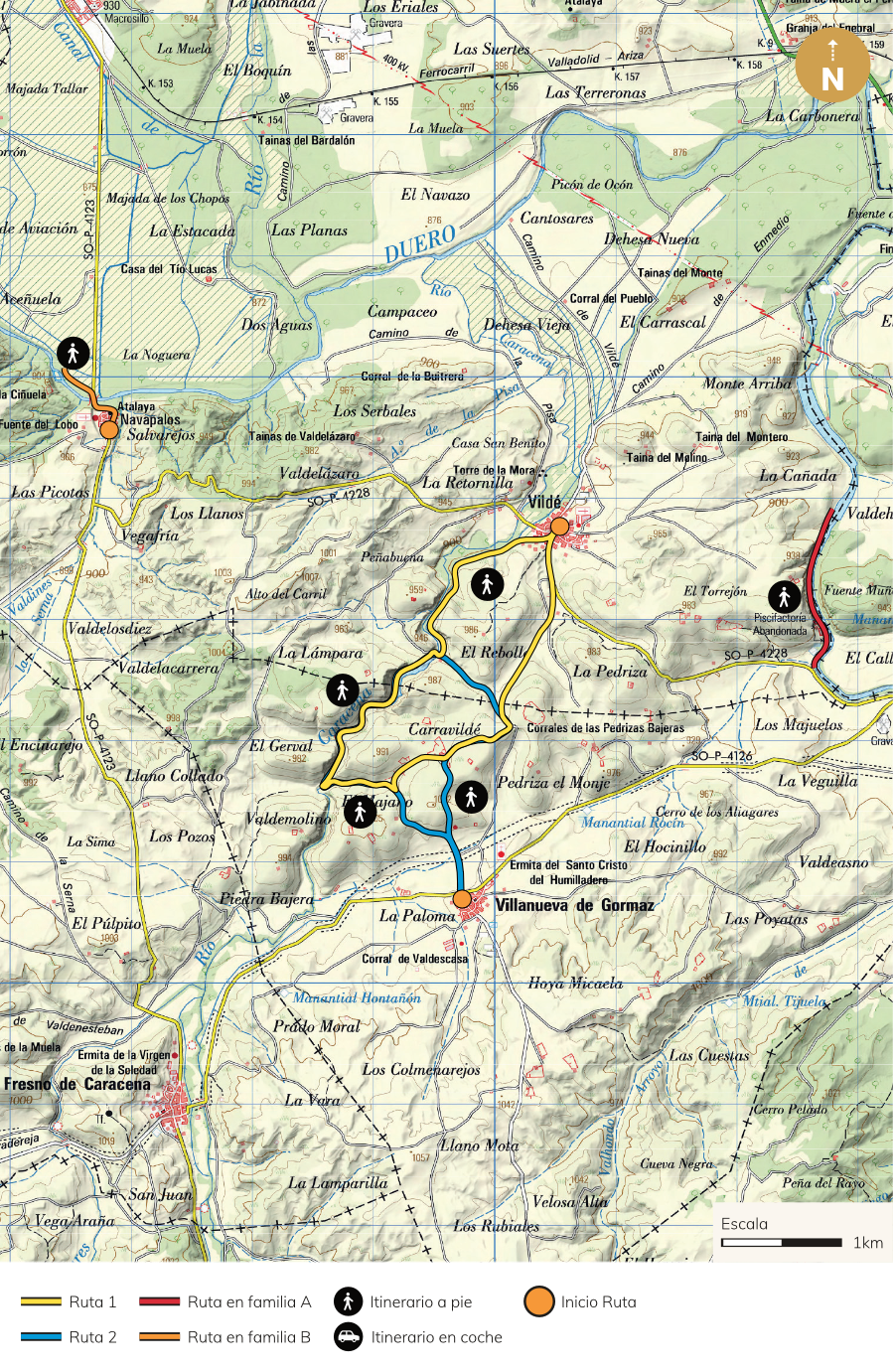 Cretaceous limestone domes that exist in this area of ​​the Río Duero are common and almost all have created similar landscapes. Nearby are the pedriza of the Burgo de Osma, of Berlanga de Duero or the Paones ... but all of them, this is certainly the most spectacular.

The constant erosion by river Caracena puts the entire surface discovered calcareous and livestock pressure has made the look pedriza practically naked regarding another vegetation. In many hillsides growing variety of perennials and shrubs like Genista scopius, habitat for steppe birds, some as threatened as Dupont's lark and the Black-bellied sandgrouse, you have here a small redoubt broken loose from their larger populations in the moors of the south.

The contrast is in the landscape created by the river rock cutting, forming a not very high canyon walls, but aesthetically very beautiful and riparian vegetation lining around the bed of the river, except about 800 meters where the small reservoir irrigation, makes up almost 100 years, covers from side to side of the gorge adding a touch of diversity. Woodland it consists of high and well preserved black poplars and white poplars, source of refuge for a variety of forest birds.

1 First part of the town of Vildé. From the square to the side of the water source we can take the path without mark- southwesterly direction that will take us to the edge of the river on its right bank and, slowly, with the slopes being fitted, to the same dam wall. We can move from one side to the other of the river by the shuttering of small dam. As we discussed in the chapter of observations, we will avoid further walking along the edge of the cliffs because we can scare and lift all birds kept there. We can return to Vildé a path that goes to our left, to the east, and it will go through a good part of the pedriza with its typical birds.

2 The other itinerary will depart from Villanueva de Gormaz. From here there is a path that crosses the pedriza and reaches the river, upstream of the dam and see part of their woodland, even if the river goes very grown it will be impossible to move to the left bank where there is a small path that comes from Fresno de Caracena. We can then continue on this path to continue hearing the central part of the pedriza, see some of his tainas and corrales, and return by another path parallel to the first, to Villanueva.

A The Duero gorge at Gormaz. Although geologically we are talking about the same space as the pedriza, the Río Duero prints more character to this small gorge. The river in this section is dammed by the central Bubones. There is a path, on the left bank, which leaves us a source, to the side of the fish farm it is not abandoned though it appears on some maps as well- and skirting, there is a small path that allows us to commit to us in this space where vultures they are constant, as well as other birds of the rocks like the Red-billed chough, Ravens, Common kestrel , Rufous-tailed rock thrush, Blue rock thrush.

B The river Duero at Navapalos. The creation, recently, a small hydroelectric plant has led to a regrowth of the river at this point that has favored the presence of certain waterfowl.

Depending on the time of year we can see from Great cormorant, Grey heron, Common kingfisher, grebes, Common moorthen, Sand martin, Western marsh harrier, and another passerines like Reed warbler, Winter wren and Cetti's warbler... all in an easy way as you can see almost everything from near the bridge that crosses the river here. It is also very good spot to observe birds of prey. We'll have to look for the slopes of Navapalos, northward, planting apple trees that extends many hundreds of hectares has reduced the ornithological value of that property.

If what we want is the observation of all species, from all walks, the best month is May. Earlier this month already have reached almost all species and deployment of the gorges and singing in the wilderness will be overwhelming. In the scarpment, since mid-March will have been singing strongly the Blue rock thrush, because there are several couples breed here.

In May he takes over the singing-here- his relative, the Rufous-tailed rock thrush. In the thick of the river we can see and hear the Garden warbler and Blackcap, the Golden oriole, the European robin, the Cetti's warbler and the Bonelli's warbler. Continue creating vultures and Egyptian vulture, with eggs or very young chicks and chickens recent and more grown the first.

In April we can hear the beautiful singing of the Ortolan bunting, one of the most common birds along with Black-eared wheatear, They are occupying the nearest rocky areas. The Greater short-toed lark and the Tawny Pipit they live also by the environment where it still survives Dupont's lark. We've talked about the difficulties in observing, but nothing to be early a bit in those weeks of May or at the beginning of June, We can hear her singing fluting.

This wilderness can not just walk it in spring. Late August and throughout September, we may be able to detect the low Eurasian dotterel. This area is a favorite haunt for the species and can be seen almost every year, although we must be very attentive to his trademark claim, audible some distance. Other species present in this location is Black-bellied sandgrouse, moving among the heath and farmland further south.

At this time also the joint observation of the reservoir and cut serve to observe a number of species, in some other way and summer and still present. They begin to appear some Great cormorant, Grey heron, Common kingfisher, Common sandpiper... in the reservoir raised the Mallards, the Common moorthen and the Water rail.

As you begin reaching the fall and the weeks will decrease the number of species. The wintering, we will see Meadow pipit on the moor and as is the year Siskins and Common chiffchaff in the riparian forest and, with a little luck, some Alpine accentor it will call at the crags. 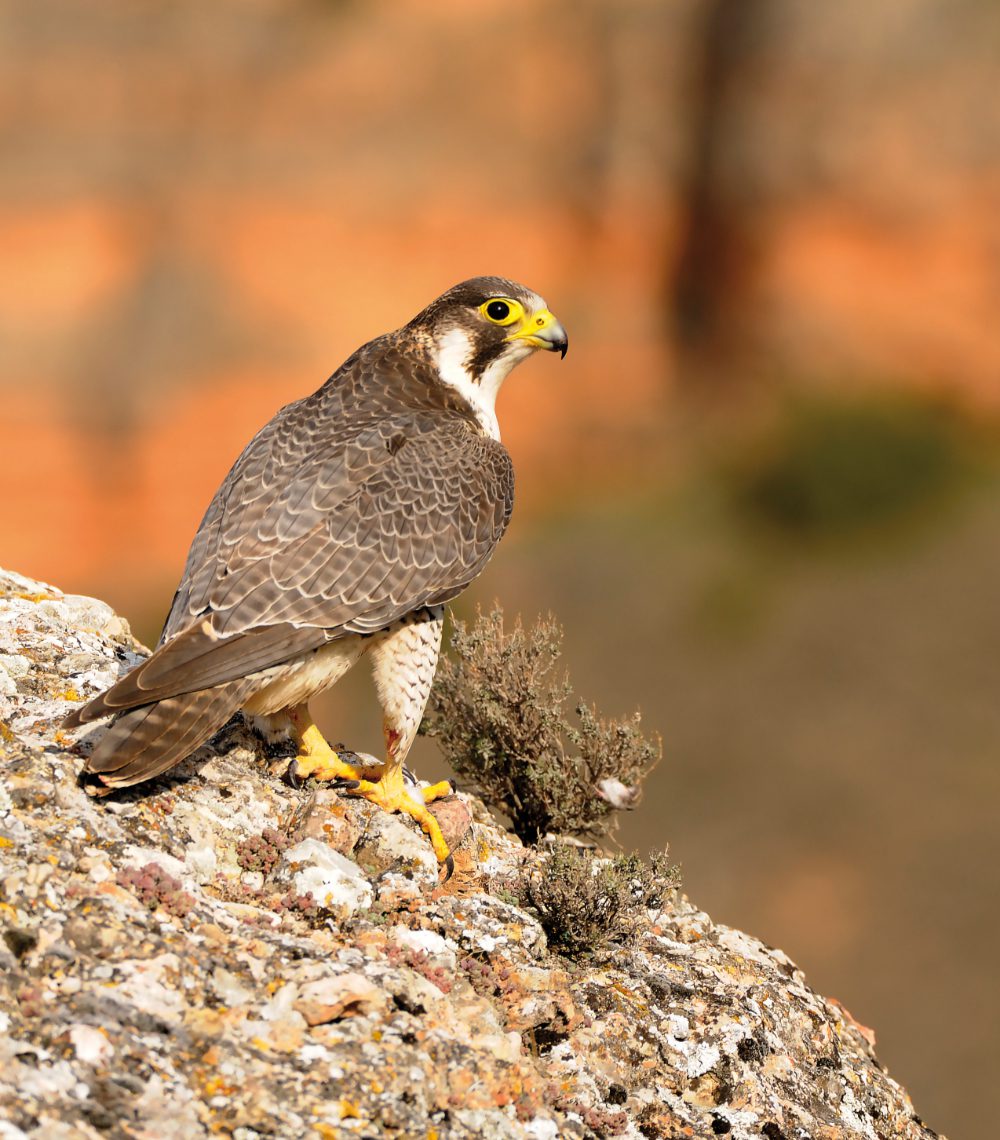